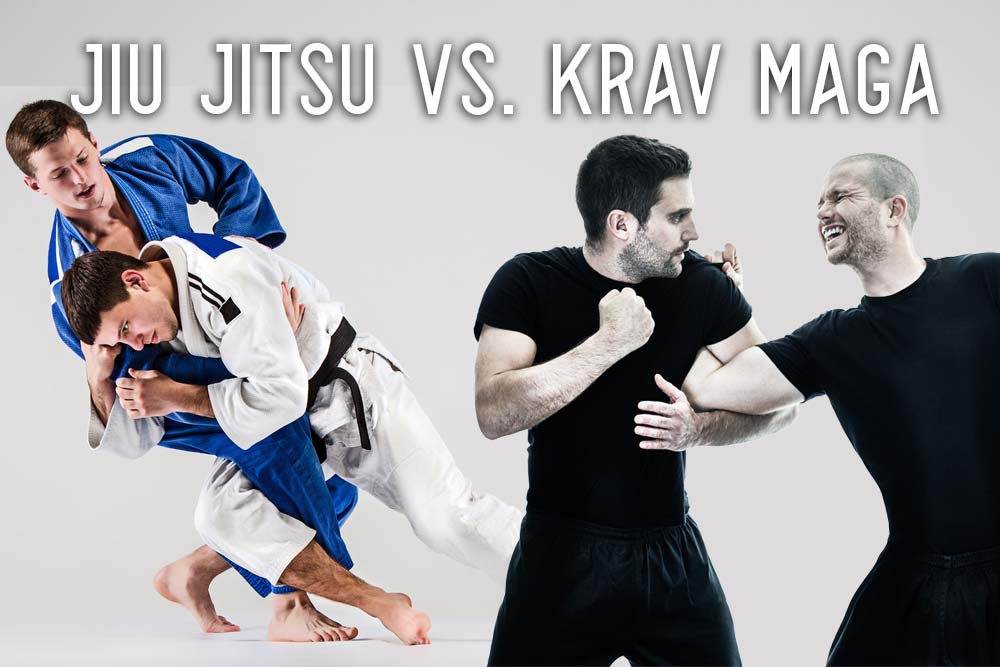 Check out Twitter, Facebook or Quora, and you’ll find people arguing over Krav Maga vs. BJJ. That’s because both martial arts enjoy a reputation for being extremely effective for self-defense. And so, the burning question everyone keeps asking,

“Which is better for self-defense, Krav Maga or Brazilian Jiu Jitsu?”

The answer: it depends—and here’s why:

Self-defense is a deeply personal journey. The style of self-defense that’s right for you may not be right for someone else.

Some men aren’t humble enough to get choked out by a 120 pound woman. Likewise, some people don’t want to spend their Friday night getting kicked or punched, and then leave the gym bruised or worse.

That’s why, in this post, you’re going to learn about Krav Maga and Brazilian Jiu Jitsu. And by the end, you’ll be ready to choose the self-defense system that’s right for you.

So, let’s get started!

Originally designed as a military self-defense and fighting system for the Israel Defense Forces, Krav Maga is a combination of techniques from Boxing, Judo, Jiu Jitsu, and Aikido.

Krav Maga focuses on practical techniques designed for quickly incapacitating an attacker. The principles behind Krav Maga are simple and straight forward:

Krav Maga covers many of the self-defense problems you may face in the real world. Your attacker may come at you with a weapon or unarmed. Either way, Krav Maga teaches you some good techniques for dealing with these types of scenarios.

Here’s a short video on what Krav Maga looks like during a real life scenarios:

As you saw from the video, Krav Maga requires speed, aggression, and explosiveness for performing many of the techniques.

In the years following the rise of mixed martial arts, Brazilian Jiu Jitsu (BJJ) evolved into a a fundamental skillset of professinal fighters. Many people insist BJJ is a sport and not suitable for self-defense.

This is simply not true.

“…to help you survive real fight situations, standing up and on the ground. In more simple words, they don’t know Helio Gracie self defense program which is the real BJJ that was exposed to the world!” You can read more from Moshe Kaitz here.

Like Krav Maga, you may use the self-defense techniques of BJJ to defend against weapons.

Here’s a short video on using BJJ for self-defense:

Finally, BJJ doesn’t require aggression or explosiveness to perform most of the techniques. Instead, BJJ uses positioning and leverage, allowing for even the smallest individual to control a bigger and stronger person.

So, now that you know more about Krav Maga and BJJ, you’re ready to choose one discipline and get started, right?

Well, not so fast.

Remember, you want to choose the one that’s best for you.

So, let’s take a look at some of the key differences.

That’s right, your personality plays an important role in deciding on whether to train Krav Maga or BJJ.

A major difference between Krav Maga and BJJ is the level of aggression required to subdue an attacker.

Certain people lack the aggression to perform certain Krav Maga techniques. That’s because, some people can’t see themselves gouging out another person’s eye or using a pen to stab someone in the throat.

Also, most ordinary people don’t possess the confident aggression needed for certain Krav Maga techniques. Sure, your level of confidence could grow as you improve with Krav Maga.

But, what happens when you face a bigger, stronger and more aggressive attacker. This could prove to a major problem for someone trained in Krav Maga.

Brazilian Jiu Jitsu, on the other hand, focuses more on thoughtful technique to subdue an attacker. Always protecting yourself and working towards a dominant position.

Aggression in BJJ tends to harm you more than help you. In BJJ, you’ll maximize your efficiency while expending the least amount of energy when you control your aggression.

So, when deciding on Krav Maga or BJJ, think about how well your personality fits with the principles for each martial art.

Now, consider your body and how you’re going to use it in a self-defense situation.

And of course, you can get into better shape, improve your speed, and build more explosive strength. But, what happens when you come up against someone who’s already bigger, faster, and stronger than you.

That’s right, you’re probably going to end up getting hurt.

So, think about how you’re going to use your body when you consider training either Krav Maga or BJJ.

Finally, consider what you’re going to be training before you make your decision on Krav Maga or BJJ.

Krav Maga is continuing to move further and further away from the original Krav Maga developed for the Israel Defense Force. With the growth of BJJ as a sport, Krav Maga grew in reputation as the ultimate self-defense system.

Because of the name’s popularity, a lot of gyms claim they offer Krav Maga training. What they’re really offering is a variation of Krav Maga, BJJ, MMA, and whatever else the instructors include in the training.

Finally, practicing certain Krav Maga techniques means you’re practicing on a certain level of theory. When sparring, it’s impossible for you to strike a weak point on your training partner’s body at full speed without harming them.

During a sparring session, you’re able to train full speed with full resistance. That’s because, you or your partner can tap at anytime, signaling a stoppage in the fight.

So, before choosing Krav Maga or BJJ, consider the type of training that’s best for you.

And so, the debate on Krav Maga vs. BJJ continues on as supporters claim superiority for one martial art over the other.

The problem with the debate is simple. It doesn’t really matter.

What does matter is your ability to protect yourself or a loved one. That’s all that really matters, right?

So, here’s what I recommend for your self-defense training.

Besides, I’d rather have too much self-defense training than not enough.

If you’re ready to get started with Brazilian jiu jitsu, read this post on How to Choose the Best Jiu Jitsu School in Your Area.